It’s estimated that 50% of time spent in meetings is wasted. Some of the top time wasters in meetings are small talk, comments that don’t come to fruition, and digressions that cut down on the value added. 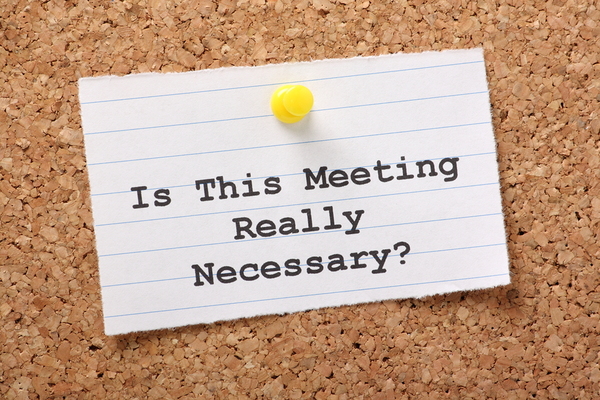 Only if it aligns with company and team goals.

On average, meetings take up 62 hours every month, in organizations nationwide. So if you’re counting, 50% of that is 31 hours per month, of wasted time. That’s more than 75% of the hours in a standard 40-hour work week.

If employees gained even some of that time back, they’d be exponentially more productive. Plus, many people hate wasting time in meetings, so they’d be happier, in all likelihood.

So it seems like a good idea to cut down on meetings in the new year, right?

The Agenda Test is a good business strategy for reducing the number of meetings in an organization.

Whenever you are tempted to call a meeting, visualize (or create an actual) Venn diagram. The first circle is articulated companywide strategies and goals. The second circle is the meeting’s agenda. The third circle is your team’s agenda.

For a meeting to be productive and worthwhile, it has to result in overlap in all three of these circles.

In other words, if your team is responsible for a crucial software update that’s part of a companywide launch, a meeting to discuss realistic launch dates and set them in stone is a very good reason for a meeting. An open airing of opinions about the viability and potential roadblocks is good business leadership. Even if you have a strong idea of what the launch date should be, it’s a good exercise in team-building to establish it publicly, with a meeting. The end result should be: Go Forth and Launch on X Date!

By the same token, a meeting to discuss whether Patch A or Patch B is the best way to update the software may not be a good idea. It doesn’t firmly align with the company’s goals, but it a more micro contributor to them. Individual conversations and presentations between management and team leaders might be more productive.

Up to 50% of meeting time may be wasted, and thus a drain on productivity.

How to Reduce Meeting Invitations

But reducing the number of meetings called is only one part of the productivity problem. Many people, especially higher level managers, may be asked to attend too many meetings. This can be especially true if the company is small or if the culture values open information, such as public access to everyone’s calendar.

If you’re asked to a meeting that doesn’t really concern your core areas of responsibility, how should you respond?

First, think about whether the meeting has any value to you or your function. Some meetings, called by your manager, higher-ups in the company, or key clients, shouldn’t be avoided. Show respect whether you personally see the value in the meeting or not. In addition, team-building can result from meetings, and the soft benefit has value as well.

Second, though, be candid (but polite) about your own priorities. The Harvard Business Review suggests saying something like “As you know, we need to be prioritizing the launch of Product X for the next two weeks. Can we touch base after that?” Some will take the hint and have the meeting without you.

Meetings can be drains on productivity. Make sure the ones you call are aligned with company and team goals. If you are asked to an overabundance of meetings, accept only those of value to your core responsibilities or your role.