Does your smartphone need three cameras? Makers of phones and their cameras believe so and they believe you’re willing to pay a premium for the opportunity. As reported by The Singapore Women’s Weekly, smartphones and their cameras can be extremely helpful for you, especially when you’re on vacation, but does this really justify the overkill when it comes to cameras?

That’s the latest technology news conjecture about LG’s V40, which would feature three back cameras and two front cameras. What all these cameras will do is unclear, but the growth of cameras on new smartphone models is considerable.

What’s behind the rise of the smartphone camera?

Technological innovation is one key driver. Artificial intelligence and machine learning have enhanced the capabilities of smartphone cameras. Today, these tools can optimize settings based on shooting conditions, whether it’s available light, orientation, or portrait subject. Modes and settings not previously available can create panoramas, night shots, and other finished products that earlier smartphone cameras could not achieve.

The LG V40 camera configuration is still not fully known. However, two of three back cameras are likely to be devoted to standard and LG’s ultrawide lens. The third may feature zoom, bokeh or other features.

One of the front cameras may allow for 3D mapping of the user’s face, allowing facial recognition to unlock your device.

Three back cameras is not new, as the Huawei P20 Pro, launched in spring 2018, also features such a configuration. The Huawei phone was designed in partnership with noted German camera maker Leica. It’s being pitched as a cheaper alternative for photographers than a high-end camera dedicated to the available features.

Just how in use are smartphone cameras?

The vast majority of the 2017 photos – 85 percent – were taken with a smartphone, with digital cameras accounting for 10.3 percent and tablets for 4.7 percent.

The multi-lens smartphone camera dates to 2011. The iPhone 7 Plus pioneered the inclusion of a 28 mm wide-angle lens and a 56 mm portrait lens with zoom functionality. Many phone makers followed suit, and the dual-lens rear cameras are now relatively commonplace. 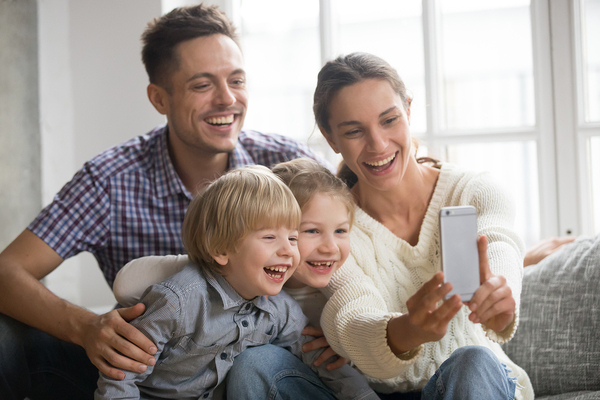 Smartphone photos are a routine part of life today, with photos taken via front- and back-facing cameras.

The smartphone camera evolution has reshaped how cameras and phones are marketed. The camera is no longer a nice-to-have accessory. Instead, marketers’ business strategy is focusing on the importance of the selfie, Instagram, and cloud-based photo sharing platforms as an essential part of our lives today.

Ad campaigns are increasingly centered on sharing photos of consumers interacting with brands via selfies and image recognition apps.

Information consumers capture is highly valuable to brands eager to gather more data on how consumers are using their products. New and better ways to use camera technology to understand consumer behavior has a high value to brand marketers.

There’s much more on the horizon, too. As augmented reality becomes more affordable and available, cameras will be increasingly used to create these experiences for users. Pokémon GO showed how much people want to use their phones to interact with apps and engage in their recreational activities. Customized lenses and filters will likely continue to be popular.

Innovation will continue to drive more and better cameras on all of our devices. As marketers identify ways to influence how we use these devices, the growth of smartphone camera activity is likely to grow, too.