For a number of decades, fossil fuels such as coal, oil, and gas have been flagged for contributing to greenhouse gas emissions that contribute to global warming and air pollution. Alternative energies, such as solar and wind, have been touted as alternatives whose sources are endlessly renewable and whose costs are cheaper, which is why so many home owners are contacting companies like derby solar panels to have the necessary technology fitted in their properties. However, we’ll know when renewable energy really takes off when we see it being incorporated by businesses worldwide. Some businesses may choose to use a solar equipment supplier whereas others are yet to make the move from fossil fuels to solar power. Fossil fuels will eventually run out; solar and wind provision can go on forever. Fossil fuels are extremely damaging for the environment too. This is probably why it is now so easy to use something like this deep cycle solar battery for your solar-energy resources, because it makes things so much easier and more energy-efficient for you. 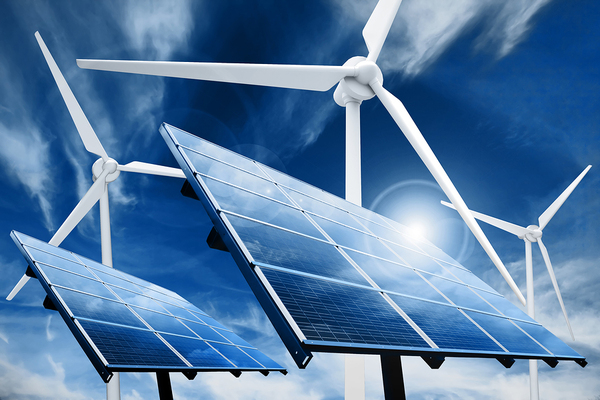 Despite this, exploration and production of fossil fuels has continued apace, with oil, gas, and coal still the go-to method for heating and cooling buildings and other spaces in many places.

It’s becoming increasingly clear, however, that renewable energy is not just the province of the idealistic and green-inclined. It’s an engine of job growth for business strategy. It’s big business, with rapidly increasingly capacity and emphasis. Between 2002 and 2014, for example, capacity for solar energy rose an extraordinary 5,700%.

Solar energy has reached a critical mass in which it looks to eventually be surpassing fossil fuels in these measures of business health. Many companies are already looking to commercial solar operations and maintenance services to help bolster their energy needs, after all.

Let’s look purely at the rise in job growth across the nation in renewable energy. As Fortune recently noted, the U.S. Bureau of Labor Statistics indicates that “wind turbine service technician” is the fastest-growing job it tracks, with a whopping 108% increase in positions expected between 2014 and 2014.

In just one year, between 2015 and 2016, the number of people employed in the wind energy field skyrocketed over one-third. The wind energy sector current employs 101,738 people. Compare that to the coal industry, which employed just 86,035 people last year, of which 57,325 were coal miners.

Employment in solar energy is not far behind. It employs many more people than wind energy (and certainly more than coal), at 370,000. Job growth between 2015 and 2016 increased 25%. Not only that, but the U.S. BLS expects job expansion for photovoltaic panel installers to continue at roughly that rate, 24%, until 2024.

Compare this job growth to that of the coal sector, whose numbers fell 24% in 2016.

Growth in Capacity, Growth for the Future

Much of this growth is being fueled by increases in capacity. Currently, 227 gigawatts (gw) of solar energy is installed globally. By 2020, the International Energy Agency projects that 400 gw will be installed. Compare that with the figure at the turn of the twenty-first century. Worldwide, 4 gw of solar power capacity existed.

The rise in solar capacity means that solar, particularly, is becoming much more mainstream.

Both solar and wind energy are technologies that harness already existing energy. For both, the future likely holds improvements in technology that allow them to more effectively connect with grids.

More capacity drives a decline in energy costs. Prices have dropped significantly in the last decade. Going forward, it is estimated that solar power could eventually cost just half of what natural gas does and one-third of the cost of coal.

One possible future for solar is a move from the cells and panels currently in use on buildings to a battery-based solution. It is estimated that by 2030 battery technology, combined with capacity increases, may make connecting to the grid more seamless.