During fundraising, a GP is compelled to say the two magic words: “Top quartile.” GP’s reliance on the traditional, but inaccurate IRR calculation allows for the misclassification of many firms out of and into the top quartile.

For many reasons, IRR distorts the quartile classifications. When comparing fund performance utilizing PERACS Alpha as a performance measure rather than IRR, an estimated 21% of all buyout funds across all vintages from 1995 to 2010 who label themselves as top quartile were done so erroneously. In other words, one fund out of five who presents itself as a top quartile performer in the fundraising process is likely not to deserve this attribute.

And the quartile misclassification is not limited to the top quartile players, of course. 37% of the funds in the second IRR quartile do not belong into this category according to the PERACS Alpha. 17% of the 37% are true top performers who belong into the top category but are punished by the flaws of IRR, while the remainder has a true performance that does not justify “second quartile status”.

It is further interesting to observe that the degree of misclassification varies across vintage years and can be as high as 40% in the 2002 vintage, for example. 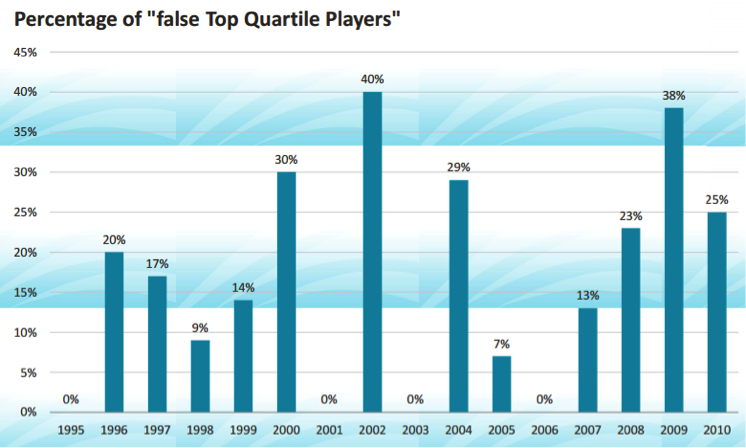 76% of PE Firms Can Truthfully Say They are “Top Quartile.”

Everyone in private equity wants to say their performance is “top quartile” … and just about everyone does. Research conducted by PERACS deconstructs how private equity firms can make this claim.

Using a representative sample of 500 PE funds, PERACS found that 67% of all funds can claim “top quartile,” according to at least one publically-available data source for their actual vintage year.

Then, if private equity funds are given the additional flexibility to manipulate their vintage year (one year before or after), the number of funds that could truthfully claim “top quartile” increased to 76%.

Being in the “top quartile” is not a meaningful criterion to assess the quality of a GP. PERACS provides more robust data analysis and performance metrics that strike to the true quality of an investor’s performance record.